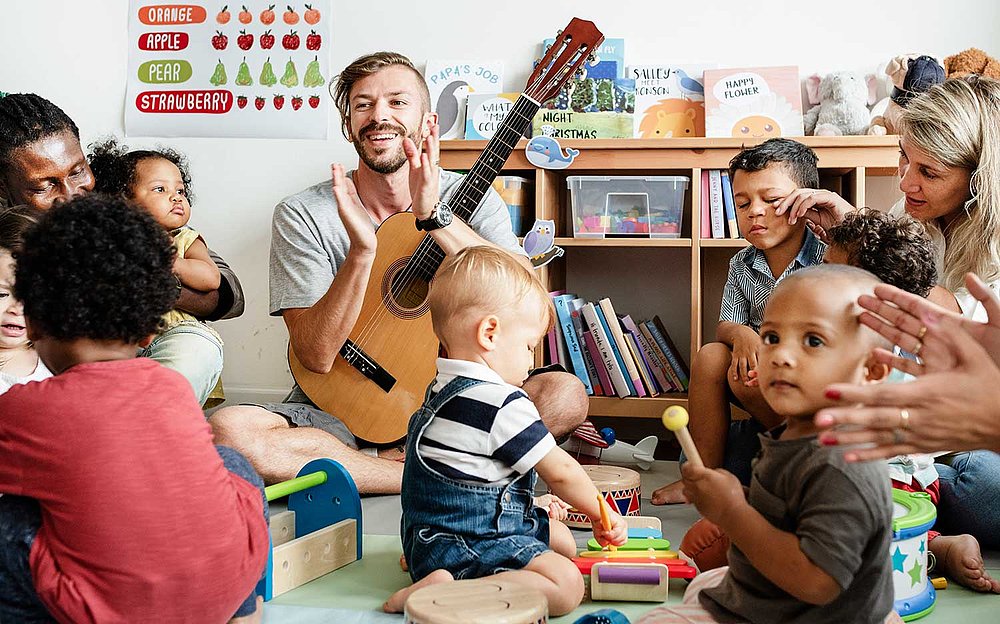 A premature birth is a shock to most parents. In Switzerland, almost 86,000 births were registered in 2020, of which 6.4 percent of children were born prematurely, i.e. before the 37th week of pregnancy. [1] A full pregnancy usually lasts 40 weeks. Fortunately, even children who weigh less than 1,000 grams at birth have an 80 percent chance of survival.

Instead of carefree hours babies and their parents are under pure stress. Due to the stress, many premature babies suffer from tension, which affects their breathing. With the help of music this tension is supposed to be released so that they can breathe deeper and more regularly. „This means they produce more energy that they urgently need for their growth,“ according to the University of Zurich (UZH). [2]

Studies have shown that music supports neurobiological processes, neurological learning and the activity and formation of the synapses. A Swiss study with the participation of the Department of Neonatology, University Hospital Zurich and University Zurich, [3] examined the to so-called creative music therapy (CMT) and it’s supporting effect on premature babies – and their families. „Our latest study results show that CMT even promotes brain development in children,“ scientist and clinical music therapist Friederike Haslbeck explains.

82 premature babies were examined during sleep using Neuroimaging by means of diffusion tensor MRI (DTI). The method allows conclusions to be drawn about the brain activity and connectivity.  of the large nerve fiber bundles in the brain. Half of the children received 20-minute music therapy two to three times a week in addition to the usual therapy.

In this form of therapy, specially trained therapists hum lullabies. It goes like this: The therapist opens the side flap of the incubator and touches the child lying in it. Then she starts to hum slowly and calmly. The body‘s reactions show that the humming reaches the baby - and can usually also be seen on the monitors because oxygen saturation, breathing or pulse rate change change. When the parents have sung a particular song to the child in the womb, the therapist takes it over in the treatment. And she encourages the parents to sing to the baby, too, because the babies have already heard their voices in their wombs.

This was the first time that imaging could demonstrate a positive effect of music therapy on brain development. DTI showed that the basic structures of the brain were not affected by the music. Nevertheless, the music therapy had a measurable effect. Friederike Haslbeck: “We found a significantly lower delay in the functional processes between the thalamus and cerebral cortex, stronger functional networks and an improved interaction of different brain regions, including those for motor skills and language-relevant areas.“

By the way, the scientist has a tip for all parents: Sing the lullabies in your mother tongue. Babies prefer this! [4]

The employees in the globegarden childcare centers also follow the tip of the scientist Friederike Haslbeck: During the daily morning circle, German and English children‘s songs are sung together with the children. In addition to language development, this also strengthens the sense of community. Singing also stimulates the happiness hormones - for a happy day at daycare.

You can read the study here.