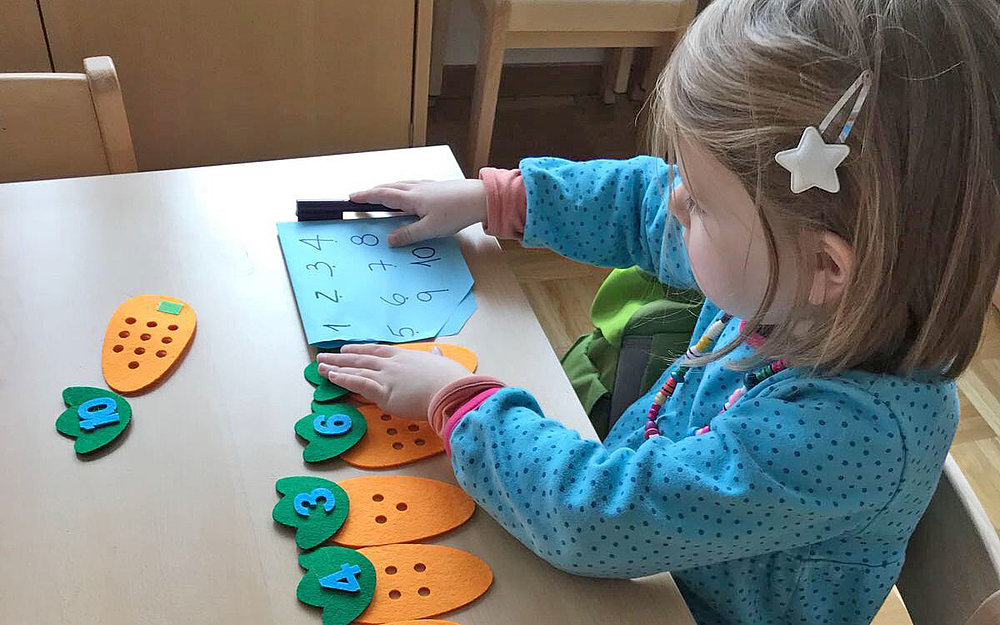 What do a pair of shoes, a dice cube, or the chickens in your neighbor›s garden have in common? They show the role that numbers already play in the lives of little children.

How many shoes do you put on every morning? What is the number on your dice cube and how many squares can you move? How many chickens come out of the neighbor›s coop every morning and peck grains in the garden? And how many eggs have they laid today? How many plates do we need to set the table for all the children?

Numbers are everywhere and children deal with them all the time. They count when they play and calculate automatically. This also means that they start developing mathematical skills very early. Infant research has shown that babies can already intuitively recognize quantities of up to four objects and use them to perform small arithmetic operations. This was tested with Mickey Mouse: When a few mice appear on a small stage, a five-month-old baby looks at them with interest. When the mice leave the stage briefly and more mice return, it reacts with surprise. That was addition, but they also recognize subtraction, Birgit Elsner, professor of developmental psychology at the University of Potsdam, has found: «Two mice were there, one is taken away - then they look at it longer when two mice are there than when only one is there.»

At globegarden, we take this into account at all stages of children›s development. With the Math Rocks educational program for babies, we enable early experiences with geometric shapes and patterns. At Twos kids compare, sort, group and count - and have fun doing it. At the Pre-K level, activities are designed to help kids integrate all their new learning into their lives. The K1 kids practice logical thinking and their mathematical understanding through play, and the kindergarteners deepen their knowledge through daily practice in K2 kids.

What lies behind mathematical competence

Children have intuitive mathematical competencies. They first learn the words for numbers. This can be done through rhymes, songs or by the caregivers always counting in the same order. Soon, children are able to make more-or-less comparisons. So: Mia has one ball, Elias has three balls. Who has more balls? This way, the children link the number word series with the size of a number and the understanding of «little» to «much» and «very much» develops.

The understanding of a whole and several parts also develops. This links the number words to the sizes. This in turn means that children understand that numbers can be put together and taken apart.

That is why mathematical competencies are important

Particularly with regard to learning at school, the development of arithmetic (number words, quantity concepts, sequences, numbers) and geometric content (dealing with patterns or sizes) as well as logical thinking are of particular importance. Children who are supported in these areas have an easier time at school.

Kristin Krajewski, a professor at the Ludwigsburg University of Education, has found that developmental delays in preschool age have a greater impact on the further development of mathematical thinking than the child›s intelligence. She was even able to prove a causal connection between a lack of mathematical precursor skills in kindergarten age and later school performance in mathematics.