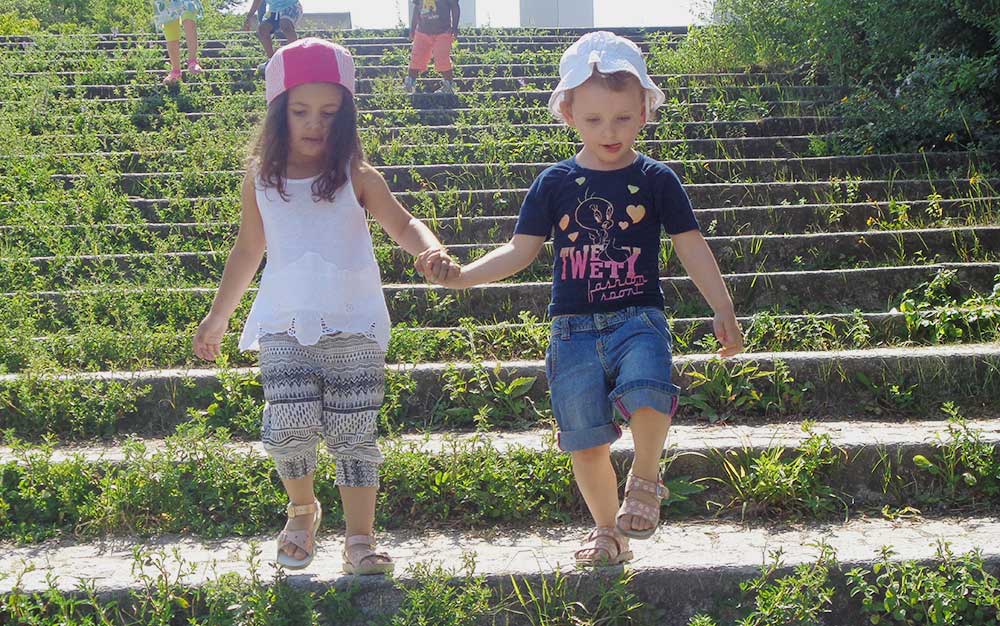 Girls dance better than boys and they are so much easier to handle. On the other hand, girls can’t play football as well as boys and have no idea about cars. These are prejudices, albeit harmless ones. But it shows how early they become noticeable. Fortunately parents have a say in this.

Everyone has prejudices. Andreas Beelmann, professor at the University of Jena in Germany and director of the Institute for Psychology is an expert on prejudice in childhood: “Around the age of three to four, children first start to prefer their own sex, later their own ethnic group or nationality.” That is part of normal development. It only becomes problematic, Mr. Beelmann says, when kids start to put their own group on a pedestal and turn differences into prejudice.

Breaking down prejudices and promoting tolerance

The psychologist’s observation sound alarming at first: Children develop prejudices at Kita- or preschool-age until it reaches it’s peek five and seven years of age. At the same time, this age is also the ideal time to take action against prejudice.

Professor Beelmann says: “This reflects the normal mental development of children. Initially they copy the social categorizations of adults, preferably from the parents. Then they have to find their own identity by delimiting people from other social groups. They later learn to differentiate and individual evaluation patterns gain the upper hand over general stereotypes.” Therefore this age is ideal to take targeted action against prejudice.

One: Ask yourself about your own biases
If young children already develop stereotypes, then adults are real masters at it. Mostly without wanting to do so. We constantly receive signals that suggest how women or men should look like or be. There is one way out: If you know your prejudices or assumptions, you lower their impact.

Consciousness starts with language. For example, when we comment on how “strong” or “brave” a boy is, or how “pretty” and “lovely” a girl. Of course, the boy can be strong and brave or the girl can be pretty and sweet. It is more about the fact that such characteristics are often attributed to the respective gender. And if you notice that you sometimes say things like: “all girls do this” or “all boys like that” – cross it out of your vocabulary. Sometimes a good talk with a friend helps to find out about possible blind spots.

Two: Children‘s books
Children love stories. Therefor books are a powerful tool to introduce children to different worlds where there are clever boys and cool girls with all their strengths - and weaknesses. Boys who can identify with girls and vice versa are less likely to rate or even devalue others.

Erika Schulze, professor at the Bielefeld University of Applied Sciences, did a research with two books (“Der Junge im Rock” and “Echte Kerle”) that leave gender stereotypes behind or leave room for ambiguity, especially in the illustrations. The result: „We have observed that non-stereotypical representations of the sexes lead to children renegotiating gender norms for themselves,“ Mrs. Schulze says. Is the person with long hair a boy or a girl? “While it is clear to one child that it has to be a ‚she‘, another child explains that it also has long hair, but that it is a boy. And another child adds, ‚Yes, boys have long hair too‘.“

Three: Set an example
Romping around, climbing, shouting, painting, putting on make-up for a birthday party. Let the kids express themselves, don’t tie their playfulness to role models. Don‘t rate if your son loves his big sister‘s tutu skirt more than the goalkeeper gloves he got for his birthday. If that puzzles you, it might be time to question your own gender images (see One).

A dad who does housework just as regularly as a mom, and also knows how to use the cleaning rag, or a mom who knows hot to use a hammer and a drill, a grandpa who can cook and a grandma who drives the car. These are all examples that undermine clichés. The more a child experiences and sees such examples, the more normal it is.

Four: Empower girls and boys
Encourage your child to express feelings and let them shed tears if they need to. Empower them to have both female and male playmates. Encourage them to run and be wild ...

Everyday life is full of little things, where it shouldn‘t matter whether the child is a boy or a girl. Allt that matters that they are happy.

Further information on the article by Professor Beelmann for the journal „Child Development“:
More about the article